After the Columbia County Agricultural Society (County Fair) held its annual exhibition in the Village of Lodi in 1863, prominent Lodi businessman, J.O. Eaton started to organize the Lodi Union Agricultural Society.  J.O. Eaton had built the Weber’s Bakery and the American Legion buildings and knew how to get things done.  Seeing the success of that County Fair sparked the idea, so he started to organize a group of citizens and held their first official meeting to form the Lodi Union Agricultural Society in 1863.  The group included representatives from Lodi, Dane, Vienna, Roxbury, Dekorra and Arlington townships and met to organize and establish the original Lodi Union Fair. Towns of Merrimac, Prairie du Sac, Sumpter, Windsor, Westport, Springfield, Lowville, Hampden, and Leeds were added to complete the 20 mile compass of Lodi, thus, Lodi Union Fair name was chosen.  The Lodi Union Agricultural Society’s first fair was held on October 2nd - 4th in 1866 on the McCloud property, which is the site of the Lodi’s First Presbyterian Church today.  The meeting was led by J.O. Eaton, Esq. and George Yule was the recording secretary.  The group chose an executive committee which drew up the constitution, by-laws and rules of membership.  The first fair classes to be offered were:  Blooded Horses, Matched Horses, Horses for Work, Mules and Jacks.  Durham Cattle, Swine, Merino Sheep, and Poultry rounded out the animal list.  Other classes included:  Fine Arts, Fruits, Flowers, Vegetables, Grain, Dairy, and finally, a Ladies Equestman Display.  In 1875, the fair was relocated to the 20 acre site on Fair Street, where the Lodi Driving Park Association trained their horses.  This half-mile track was known as the one of best in the state.  The Lodi Union Agricultural Society leased this ground for $50 per year until 1898 and they then secured a 10-year contract at $100 per year.

During those first years, admissions were charged.  A season ticket was 50 cent or single day admission was 25 cents.  Children under the age of 12 were charged a dime. They also charged for a team of horses at 50 cents and single horses were only 25 cents.

In 1909, the Fair’s Board of Directors offered shares of stock to be sold.  The first share of stock was sold to Sherm Soders.  The stockholders never received return on their investments as the profits were all pooled back into purchasing land, repairing buildings and the construction of the Information Booth/Ticket Office and the Fine Arts buildings.

The fall fair date presented conflicts with school day schedules, so they moved the fair up as a warm-up fair to the Columbia County Fair, as it still is on the calendar today. 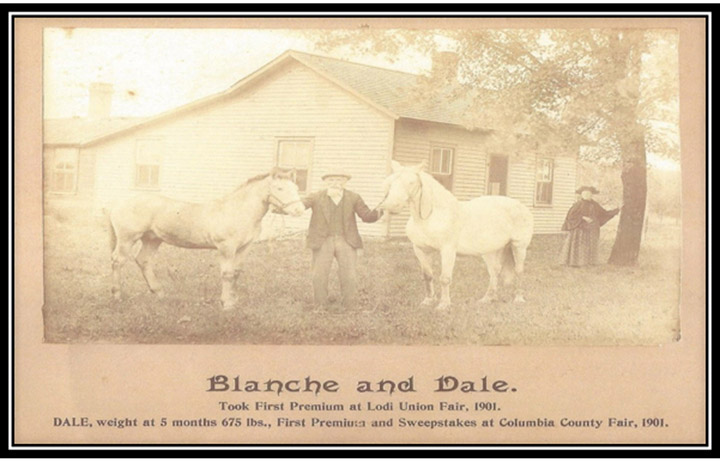 Lodi Fairgrounds served as POW Camp in 1944-1945…we still held the fair behind the grandstand! 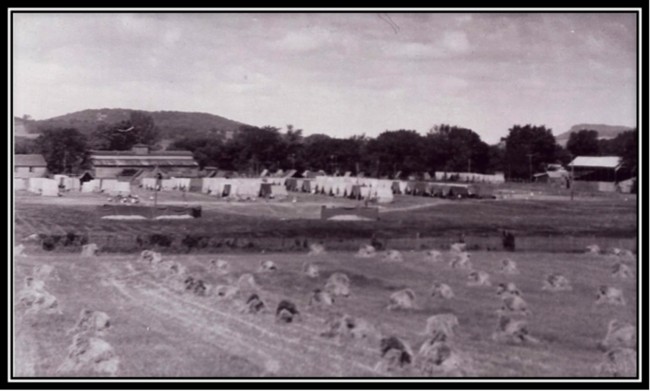 History of the Lodi Fair

During World War II in 1944, the Lodi Fairgrounds served as a German Prisoner of War Camp. Since many Americans left to fight the war, the prisoners were sent to the States to help with the shortage of workers. Some of the first projects the prisoners completed were laying concrete flooring under grandstand, in the Fine Arts Hall (aka the Jr. Exhibit Hall), the agriculture building, office and the chicken building along with some much needed roof repairs.  When these projects were completed, the strong fenced-in fairgrounds became home to 250 POWs in 1944 and 233 in 1945 along with the guards.  The Lodi Fair Association installed a large steam heating system for cooking and showers.  Originally, it was planned to house the prisoners in these buildings, but a tent city was created instead. When canning season started, a group of 160 prisoners were sorted into groups and trucked to work in 9 of the canning factories located in Lodi, Arlington, Waunakee, Poynette, Sauk City, Reedsburg, Baraboo, North Freedom and Pardeeville, as well, as other prisoners worked at local farms during the day and stayed at the camp at night. Even though the prisoners were housed on the grounds, the fair was still held behind the grandstand.  The building on the far right is the grandstand, but the large building on the left was the Fine Arts building, which had a catwalk in the peak of the roof. The guards used the catwalk as a look-out tower to keep an eye on the prisoners. Several published stories tell us that there were very few problems with the prisoners rebelling, since they were well fed, treated decently and were taught some of our farming practices. Some local residents of Lodi remember hearing the groups sing as they were marched off to church on Sunday morning. The canners were very happy with their special employees as noted in the Lodi Enterprise. “This POW group was a gang of downright ‘good guys’,” per Captain Thompson and the group left after pea packing season was over.  Later, other groups of POW arrived during peak harvest times during the war.

After the war was over, the prisoners had to return to Germany for a set amount of time.  The war had taken its toll on their homeland, so some prisoners chose to come back with their families and settled in the area.